Cloud Native computing is all about working with stateless data and serverless systems. But we all live in a stateful world, in which data flows through systems interconnected with one another through complex networks.

So how can systems be able to manage and track the flow of data in a coherent fashion and in a stateless world?

We will first iron out a few terminologies that some folks appear to be using almost interchangeably in the current cloud computing era:

First of all, let's take a look at the definition as published by the Cloud Native Computing Foundation:

I'd like to think of cloud native as an "extension" to the fundamental building blocks of the cloud infrastructure. It is what gives "life" to an otherwise rather purely mechanical set of structures.

Serverless are being referred to as stateless computing at times. What serverless computing refers to, is in essence the cloud computing execution model, in which the designated cloud infrastructural provider takes care of the dynamic allocation and management of the logistical resources for launching and running of the workload.

Concerns such as capacity planning, container management, maintenance, fault tolerance, scaling, and so on, which once used to occupy so much of the developer's time, can no longer hold developers hostage. Despite the misnomer, we need to be mindful of the fact that serverless computing still use servers, and serverless is still evolving and by no means has it completely offloaded the busy developers.

On the other hand, even though there is not an official term called serverful computing, we should be well aware that the opposite of serverless would be serverful, in which the control and management of the infrastructural systems resources are all in the hands of the developers

Stateless and stateful computing refer to the two opposing communication protocols in terms of whether or not data is being captured or retained as it flows through a system, or an ecosystem consists of one or more sub-systems.

If I have to describe these two opposing concepts to someone new to this aspect of computing, I would use a crude analogy of the animated film story of Finding Nemo. As the story goes, Nemo, the little orange clownfish, and his dad, Marlin, are separated. Marlin becomes distressed and goes searching for his son. Marlin then bumps into a blue tang fish named Dory who is experiencing an acute short-term memory loss.

It is the interaction between Marlin and Dory that we can borrow to contrast and understand stateful and stateless computing. Dory does not remember anything and cannot make the connection between any events that have happened. She represents stateless computing as she retains nothing in her memory. But, we can see too, her happy-go-lucky behavior also implies the lack of burden, and that is exactly what stateless computing is like: lightweight, efficient, and performant.

Whereas, with stateful computing, everything is heavier, because we will need to record essentially everything as the data flows through the system, including its change in state, and in the case of a highly distributed ecosystem - which is pretty much what most systems are these days - we will also need to ensure the integrity of the data itself as it relates to the data in other parts of the system.

As a result of all of these concerns, stateful systems are less performant, heavier, and can become very complex.

Stateful Computing in the Client-Server era

Let us travel a bit back in time to understand how stateful computing has evolved. Back in the client-server days in the 90's, databases as well as certain file systems came with transaction processing support. Transaction processing essentially ensures that interdependent operations on the system either all complete successfully (commit) or get cancelled (rollback) successfully.

A typical 'monolith' type of system would not have to worry about managing its transactions, since all of the components and sub-systems are being hosted in the same host machine, with a single database managing all of its data. However, as processing has become more complicated, especially in cases when multiple databases are being used, we will also need a distributed algorithm to help coordinate all of the inter-dependent processes, and to ensure integrity in all distribution atomic transactions. Two-phase commit, or 2PC, is the answer for it.

As the name implies, 2PC essentially consists of 2 phases:

In the pre-Jakarta EE days, Java EE has stateful session as well as entity Enterprise Java Beans (EJBs), as well as the Java Transaction API (JTA) for implementing stateful services for a typical enterprise application.

For web applications, JSPs and servlets rely on HTTPSession for keeping the state of data within each session.

HTTP cookies generated from the web server are being cached on the client-side web browser, and can be used for authenticating and/or tracking the returning client.

JSON Web Token (JWT) offers a compact and self-contained way to securely transmit messages as JSON object between the client and the server.

Cloud Native and the Twelve-Factor App

The 12-Factor App methodology from Heroku provides a set of guidelines for designing cloud native systems. 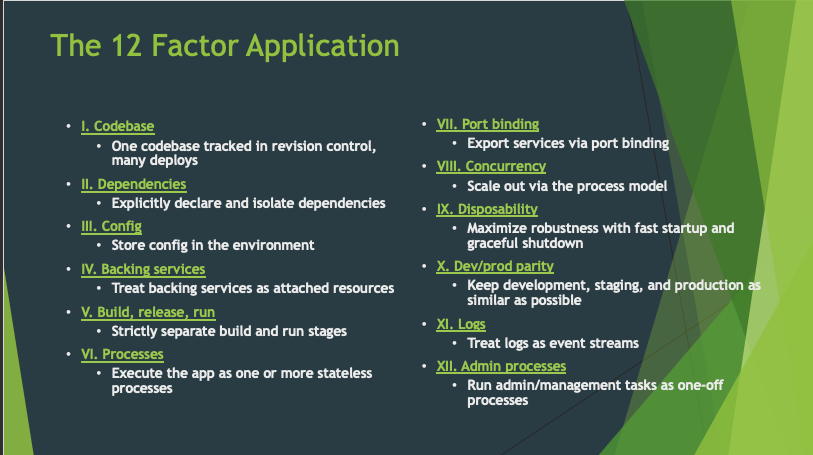 As we can see, #6 and #9 epitomize the need for highly efficient and very lightweight, stateless processes.

While microservices themselves are implemented as stateless containers, they can still utilize the operations and services outside of the containers to perform any stateful tasks.

The following are the techniques and mechanisms which we have already discussed in the earlier part of this article, namely:

Kubernetes is the de facto container orchestrator in the current cloud computing era. In a short span of roughly 7 years since its debut, it has taken the world by storm. In its early days, it supported only stateless workloads with containers that had no persistent storage or volume. From an operational point of view, re-starting a pod was simpler then, as there was no need to initialize it to the same state as other pods running within the same node inside the same cluster. However, not all workloads are meant to be stateless.

Some of the workloads do not run effectively without state, such as a database cluster that's managed by several Zookeeper instances. Each database instance needs to be aware of the Zookeeper instances that are controlling it. Likewise, the Zookeeper instances themselves establish connections between each other to elect a primary/master node. Such a database cluster is an example of a stateful workload. If we deploy Zookeeper on Kubernetes, we'll need to ensure that pods can reach other through a unique identity that does not change (e.g hostnames, IPs, etc). Other examples of stateful applications are Kafka, Redis, MongoDB, MySQL clusters, and so on.

Since Kubernetes is backed by etcd, and etcd implements a consistent consensus protocol (raft), we can leverage Kubernetes primitives to perform leader election if we aren't using an external election tool such as Zookeeper. Having a good election algorithm is crucial especially for use cases in which we only allow one service instance to perform any updates on our customer information or submit a credit card payment.

StatefulSet is the workload API object used to manage stateful applications in Kubernetes.

It manages the deployment and scaling of a set of Pods, and provides guarantees about the ordering and uniqueness of these Pods.

Together, these three features guarantee the ordering and uniqueness of the pods that make up our service. These guarantees are preserved across pod restarts and any rescheduling within the cluster, allowing us to run applications that require shared knowledge of cluster membership.

Session affinity, sometimes referred to as sticky cookies/sessions, associates all requests coming from an end-user with a single pod. This means that all traffic from a client to a pod will be — to the greatest extent possible — directed to the same pod.

The PersistentVolume subsystem provides an API for developers and infrastructure administrators that abstracts details of how storage is provided apart from how it is consumed.

From the Kubernetes Conceptual guide on Persistent Volumes:

A PersistentVolume (PV) is a piece of storage in the cluster that has been provisioned by an administrator or dynamically provisioned using Storage Classes. It is a resource in the cluster just like a node is a cluster resource. PVs are volume plugins like Volumes, but have a lifecycle independent of any individual Pod that uses the PV. This API object captures the details of the implementation of the storage, be that NFS, iSCSI, or a cloud-provider-specific storage system.

As developers, we get excited when it comes to programming design patterns. For designing stateful microservices, the Saga pattern is the replacement for the two-phase commit protocol.

While it is not impossible to use the 2PC protocol for handling distributed transactions in microservices, it is not the right tool for the job due to its blocking nature, which leads to issues such as:

Saga pattern is a more efficient design pattern in managing business transactions which span multiple services. It is the pattern of choice for managing distributed transactions across container, cluster, server, and network boundaries. Its strength lies in its flexibility of having 2 forms of coordination sagas: choreography and orchestration.

This form of the pattern uses an event-driven approach, in which the local transaction within a microservice publishes a domain event that will trigger local transaction(s) in another microservices. It is essentially a self-driven mechanism that does not rely on any 'middleperson' at all.

An simplified example design of an order processing system illustrating the concept of the choreography pattern: 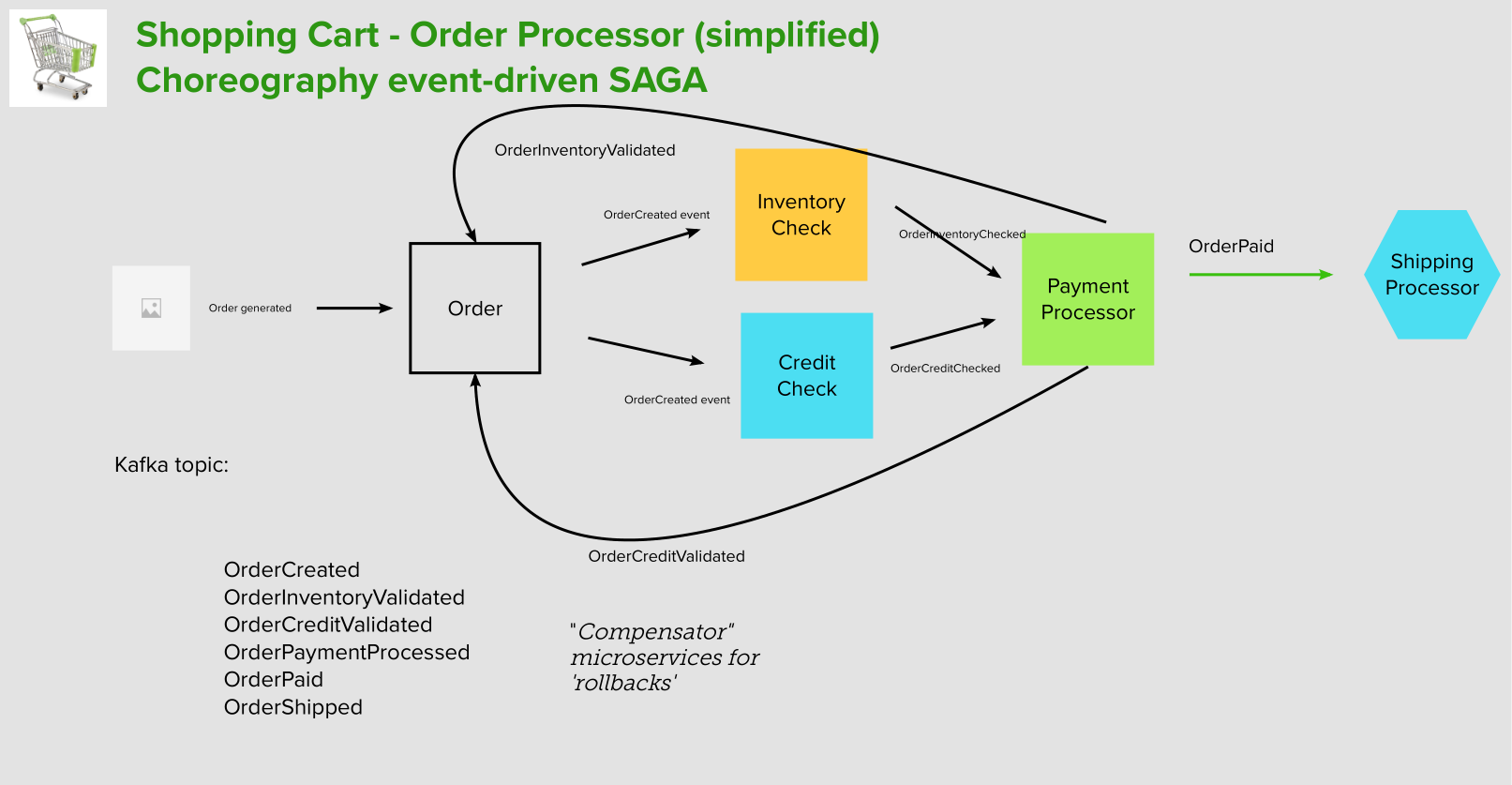 The orchestration saga relies on the orchestrator to tell the relevant microservices to start their local transactions accordingly.

Chris Richardson has a great blog post that explains the choreography vs orchestration patterns with examples.

The Saga pattern does not have the same concept as a traditional database transaction when any failure occurs and a rollback needs to happen. If a local transaction fails because it violates a business rule then the saga executes a series of compensating transactions that undo the changes that were made by the preceding local transactions.

Open Liberty implements MicroProfile LRA by way of a transaction manager that acts as a coordinator. This coordinator handles one or more participant services so that the execution of their business logic is organized in a predictable way.

Stateful workload processing is certainly not for the faint of heart, especially in the present cloud computing era. There can be a multitude of moving parts within a distributed ecosystem that are constantly updating the state of the data, and our job is to not only keep track of the state changes, but also ensure the integrity of the data as it flows through the ecosystem in the infrastructural and the application systems layers.

I am looking forward to seeing more references as well as real-world implementations of these stateful applications that will make full use of the Kubernetes features such as StatefulSets and PersistentVolumes in their deployments, while the applications themselves will be implemented using the Saga Pattern.