If you are still working with Java 8, you might have mixed feelings about the news of the release of Java 16. However, you’ll see these numbers are going to increment at a much faster and predictable rate with Java’s six-month release cadence.

I’m personally excited about Java 16! It adds Records and Pattern Matching for instanceof as standard language features with Sealed classes continuing to be a preview feature (in the second preview).

Fun fact - Records was voted the most popular Java 16 language feature by 1158 developers in this Twitter poll, with Pattern Matching for instanceof second.

In this blog post, I will limit coverage of Java 16 to its language features, why you need them, and how you can start using them in IntelliJ IDEA. You can use this link for a comprehensive list of the new Java 16 features. Let’s get started.

Records introduce a new type declaration that simplifies the task of modeling your immutable data. Though it helps cut down on boilerplate code significantly, that isn’t the primary reason for its introduction. Here’s an example:

With just one line of code, the preceding example defines a record Person with two components name and age. To create a record using IntelliJ IDEA 2021.1, select Record in the New Java Class dialog box. Fill in the name and you are good to go. 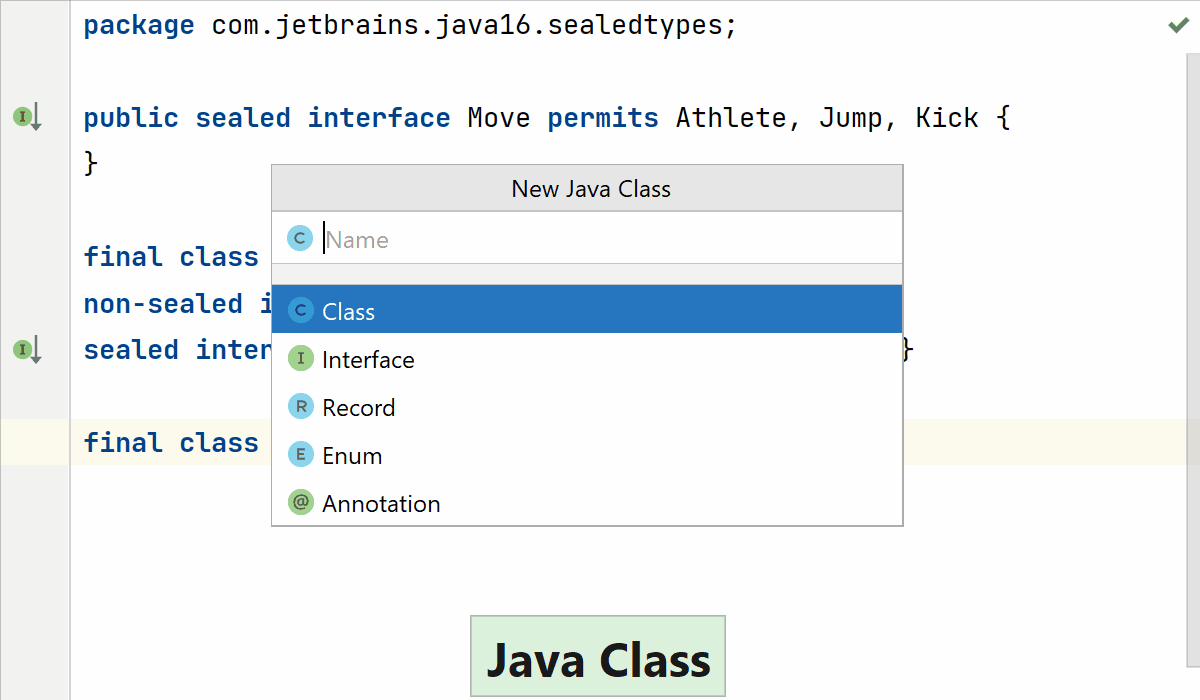 Let’s quickly check the configuration of IntelliJ IDEA on your system to ensure you can get the code to run it.

Java 16 features are supported in IntelliJ IDEA 2021.1, which is scheduled to be released this March. The early access versions of 2021.1 are already available. You can configure it to use Java 16 by selecting 16 as the Project SDK and choosing 16 (Preview) – Sealed types in the Project language level for your Project and Modules settings. 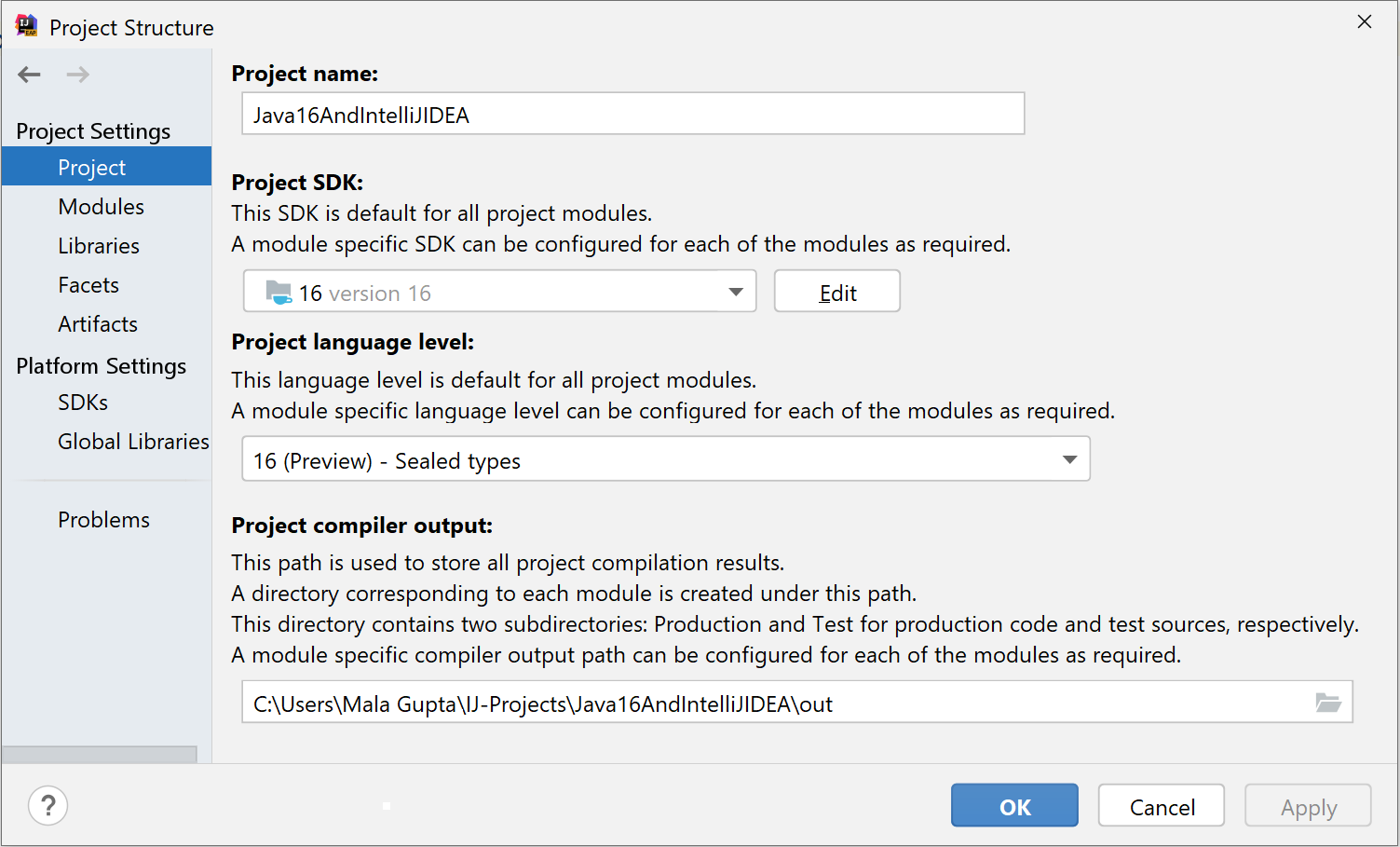 All sample code used in this blog post is hosted at Github.

Implicit members added to a record

The compilation process creates a full-blown class – a record is defined as a final class, extending the java.lang.Record class from the core Java API. For each of the components of the record Person, the compiler defines a final instance variable (name and age). Interestingly, the name of the getter method is the same as that of the data variable (it doesn’t start with get or is). Since a record is supposed to be immutable, no setter methods are defined.

The methods toString(), hashCode(), and equals() are also generated automatically for records.

Imagine you want to persist the details of, say, a person to a file. Before the introduction of records, you would need to define a regular class with instance variables, accessor methods, and implement methods from the Object class (toString(), hashcode(), and equals()). Though IntelliJ IDEA can generate all this code for you easily, there is no way to tag this class as a data class, so it would still be read as a regular class.

The following gif demonstrates how you can declare class Person as a regular class, generate code for it, implement the interface Serializable and run it to verify you can write it to a file and read from it: 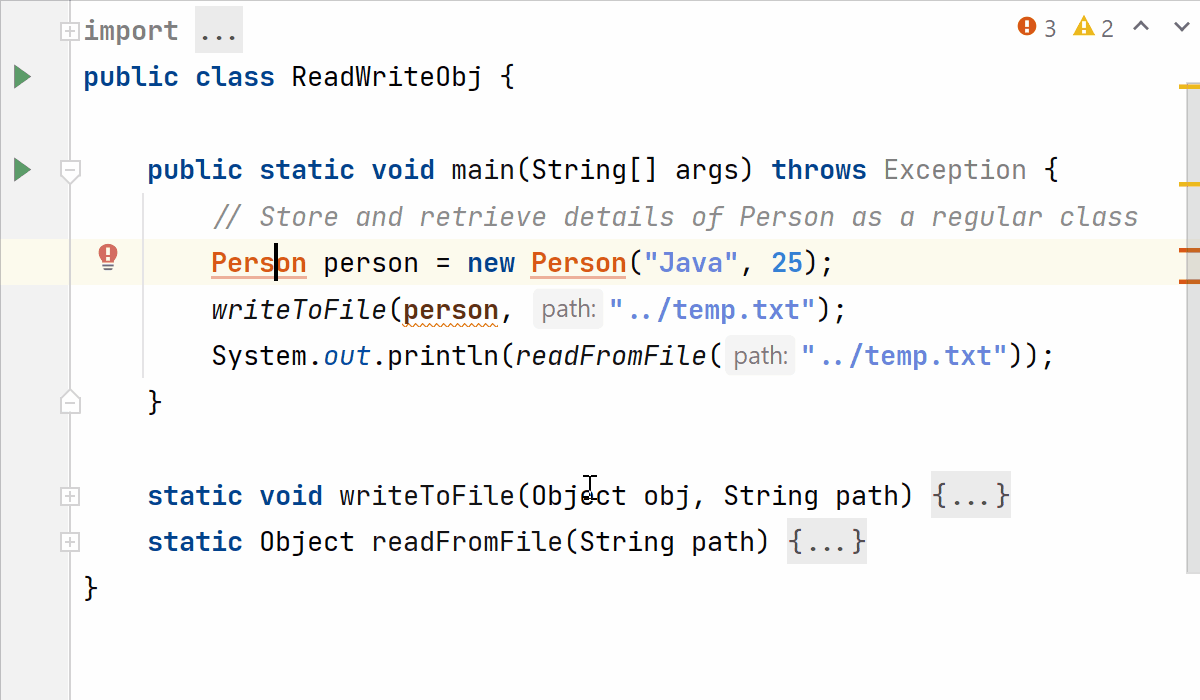 Now, let's declare Person as a record using just one line of code with components name (String) and age (int). It implements the interface Serializable since we need to persist its instances to a file. Note that you can still use the same methods to persist it to a text file. Also, there are no changes in how you instantiate it (by using the new operator): 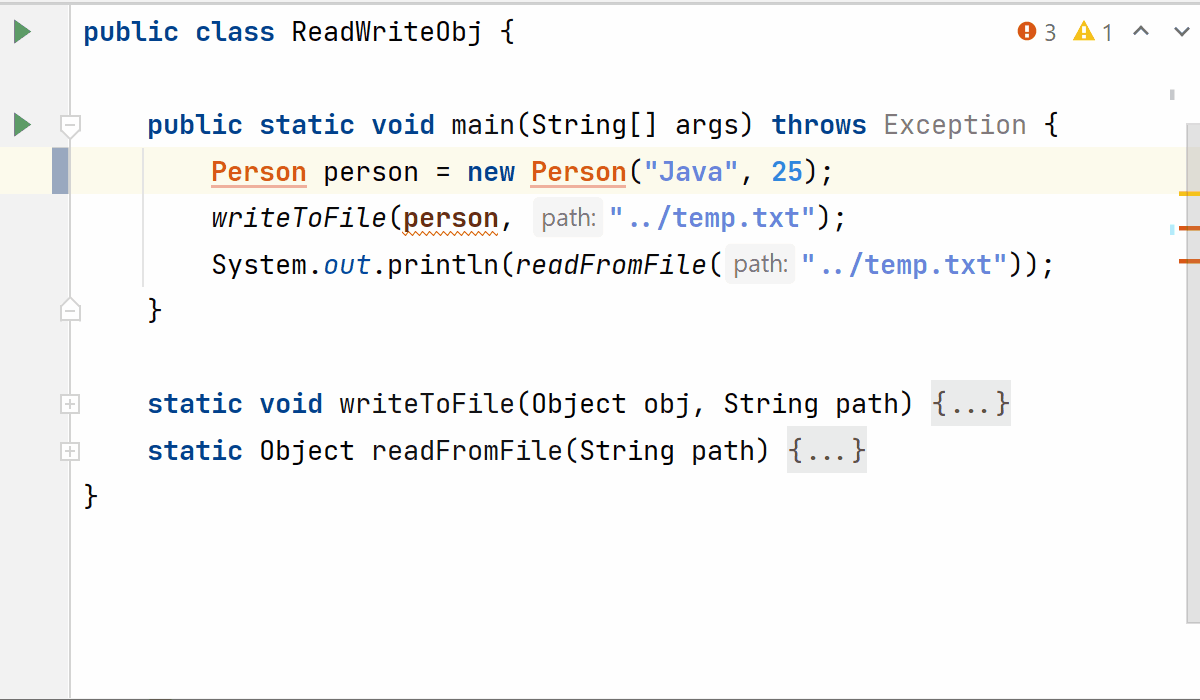 Record Person is just one example on how you can use Records. You can use records to model your data, without additional overhead of defining additional methods.

What you can and can’t add to a record

Since the state of a record is defined using components in its declaration, it doesn’t make much sense to allow the addition of instance variables (or fields) to a record. However, you can add static fields, and instance or static methods to a record, if you need them. Here’s an example:

Modifying the default behavior of a constructor in a record

The default constructor of a record just initializes its state with the values you pass to it. You can change this default behavior if necessary, for example, to validate the parameter values before they are assigned.

Let’s see how you can insert a compact constructor using the Alt+Insert shortcut in IntelliJ IDEA, and add validation code to it: 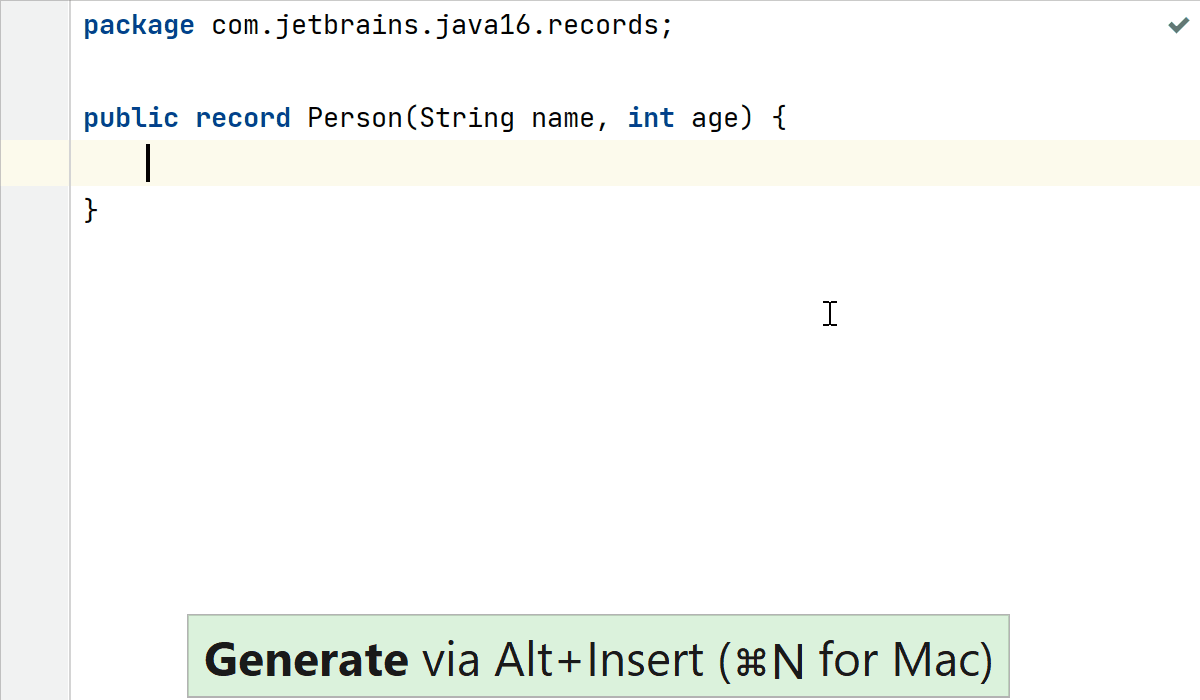 You can also add a canonical constructor to a record. This defines a parameter list – which must have the same names and order as those of the components of a record. A mismatch would result in a compilation error.

By invoking context actions in IntelliJ IDEA (with Alt+Enter), you can easily convert a canonical constructor to a compact constructor: 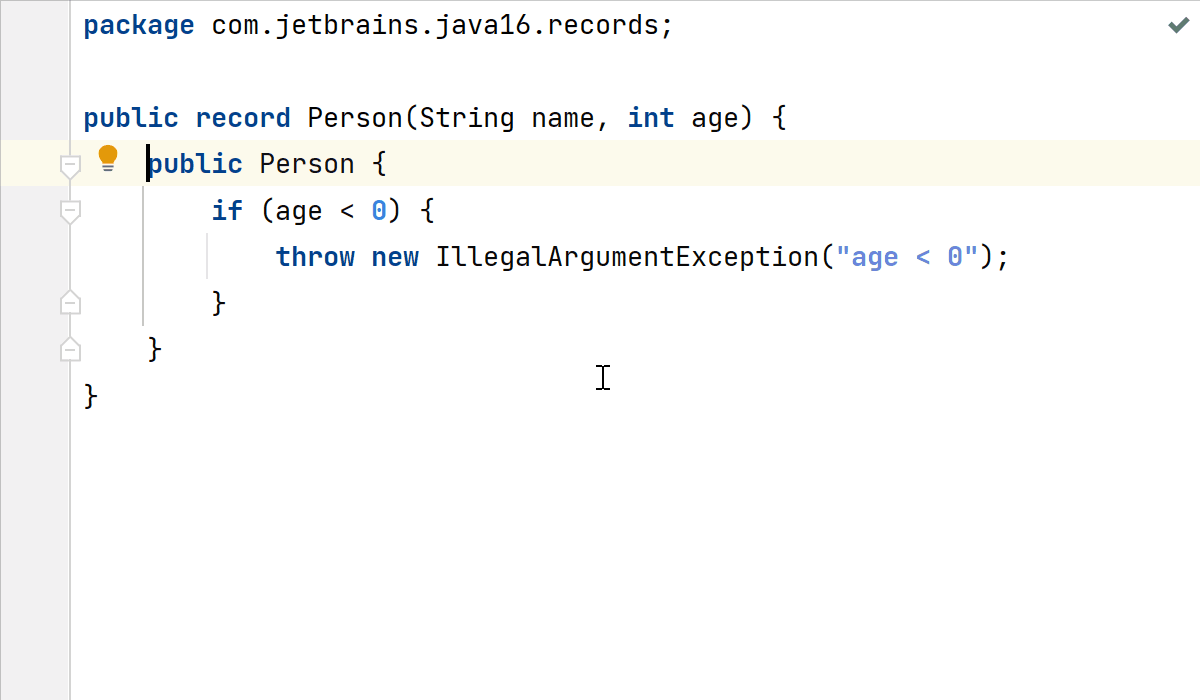 Here is example code for a regular class, Notebook, which defines a private final field pageCount:

And here’s the code for a record Point:

The following code confirms that the private and final fields of a (regular) class can be changed using reflection, but records are a harder nut to crack:

You can define records with generics. Here’s an example of a record called Parcel, which can store any object as its contents, and capture the parcel’s dimensions and weight:

You can instantiate this record as follows:

Converting Record to a regular class 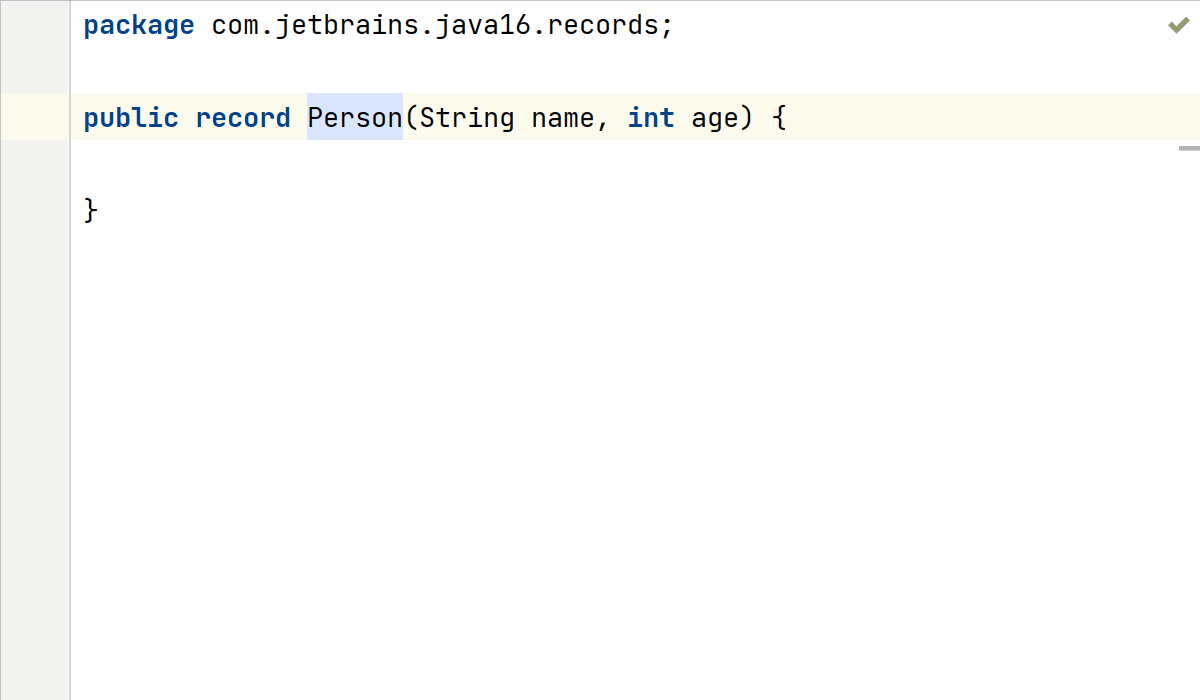 Records as components of record 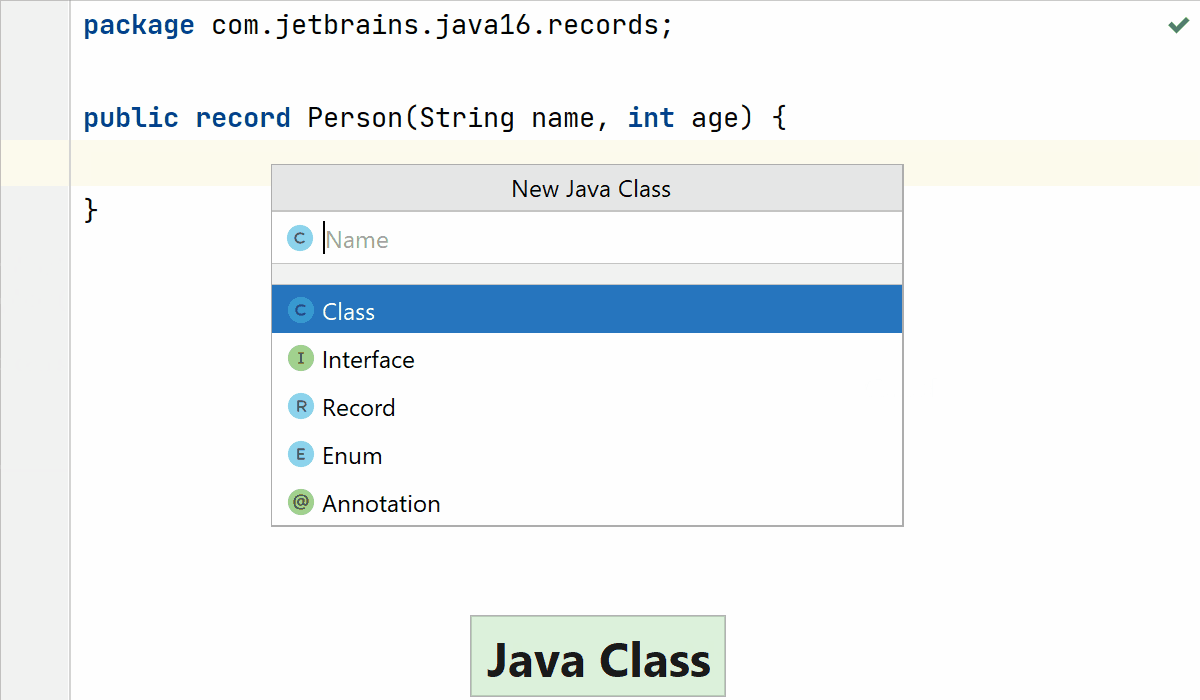 You can add an appropriate annotation to the components of a record, say, @NotNull, as demonstrated in the following gif: 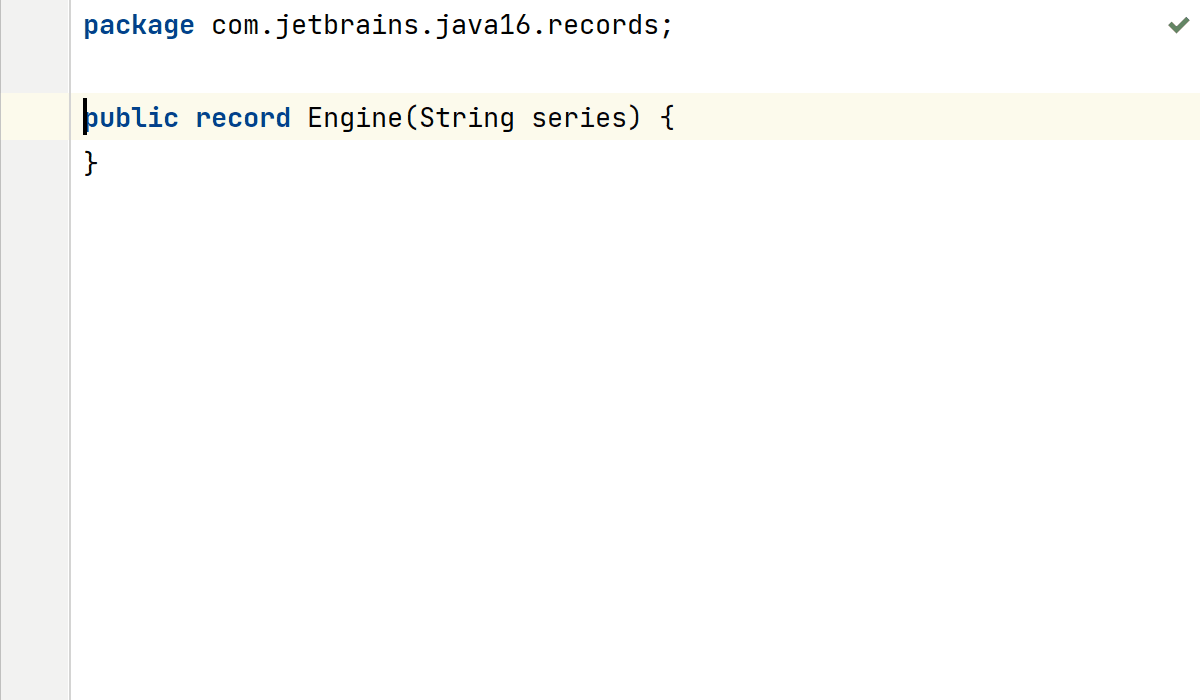 Developers often use third-party libraries like Jackson to persist value objects. Jackson supports records too. However, depending on the Jackson library version you are using (say, 2.11.3), you might need to annotate the components of your records using the annotation @JsonProperty, as follows:

If you are using Jackson 2.12.2 or later versions, you don’t need to annotate your record components with @JsonProperty.

Here’s some sample code you can use to persist and read records using Jackson:

If you are working with a Maven project, you can add the following dependencies to your pom.xml:

Reading and Writing Records to a File

You can write records to streams and read them, like other class instances. Let your record implement a relevant interface like the Serializable interface. Here’s example code, which will write to and read from a file:

Refactoring the signature of a Record

You can refactor a Record and modify the order of its components or types, modify their names, and add new or remove existing ones. IntelliJ IDEA has simplified how you apply Rename or Change Signature Refactorings. The changes would reflect in a record’s canonical constructor and its instance creation: 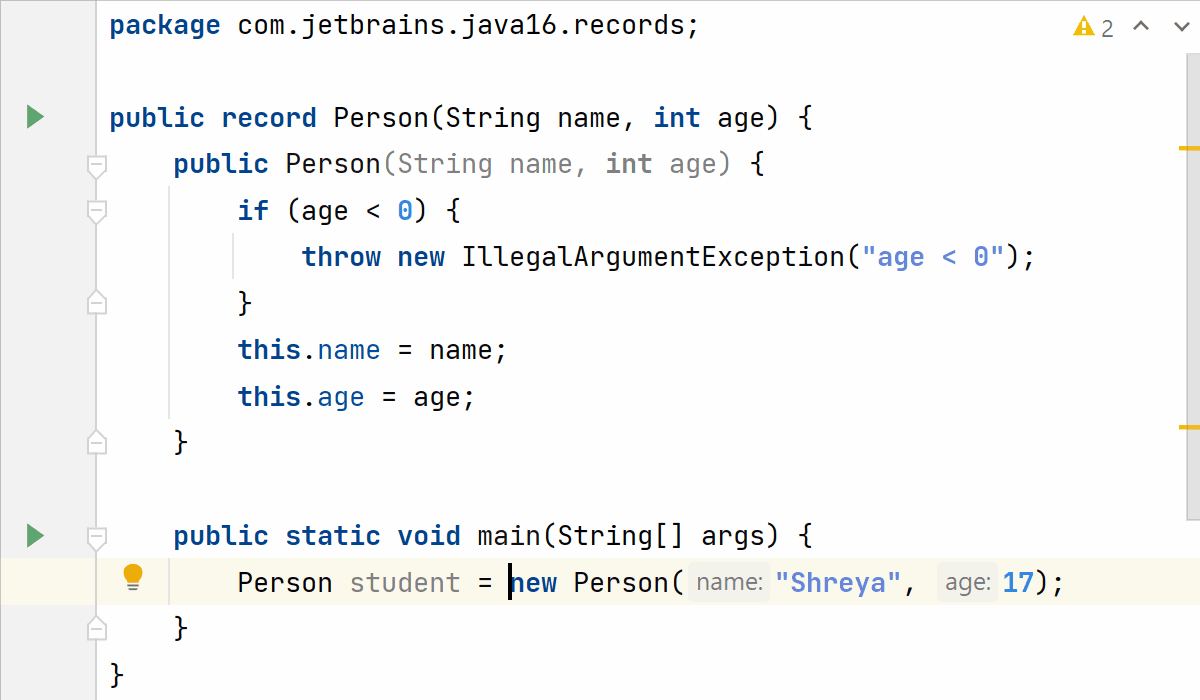 record is a restricted identifier (like var), but it isn’t a regular keyword (yet). So, the following code is valid:

However, you may want to refrain from using record as an identifier because such code will become confusing as more developers start using records.

You can define local records to model a domain object while you are processing values in a method. In the following example, the method getTopPerformingStocks finds and returns the names of the Stock with the highest value on a specified date.

Declaring implicit or explicit static members in an inner class

Starting from Java 16, an inner class can explicitly or implicitly define static members, including records.

You can declare local enums and interfaces. You can encapsulate your data or business logic, which is local to a method, within the method.

However, they cannot capture any context variable. For example, for the local enum Data, the enum constants FOO and BAR can’t be created using the method parameter input in the method test():

You can read about Sealed Classes and Interfaces as well as Pattern Matching for instanceof on the main JetBrains IntelliJ IDEA blog.

IntelliJ IDEA is not only committed to supporting new Java features, but also to ensuring that our existing intentions and inspections work with them.

IntelliJ IDEA 2021.1 supports all the new language features from Java 16. Try out Sealed classes and interfaces, Records, and Pattern Matching for instanceof today.

We love to hear from our users. Don’t forget to submit your feedback regarding the support for these features in IntelliJ IDEA.