1) If you're in an IntelliJ IDEA project already, select File > Project. Alternatively click the New Project button on the Welcome screen.

2) Select Spring Initializr on the left-hand side and then enter the following options:

Your page should look similar to this: 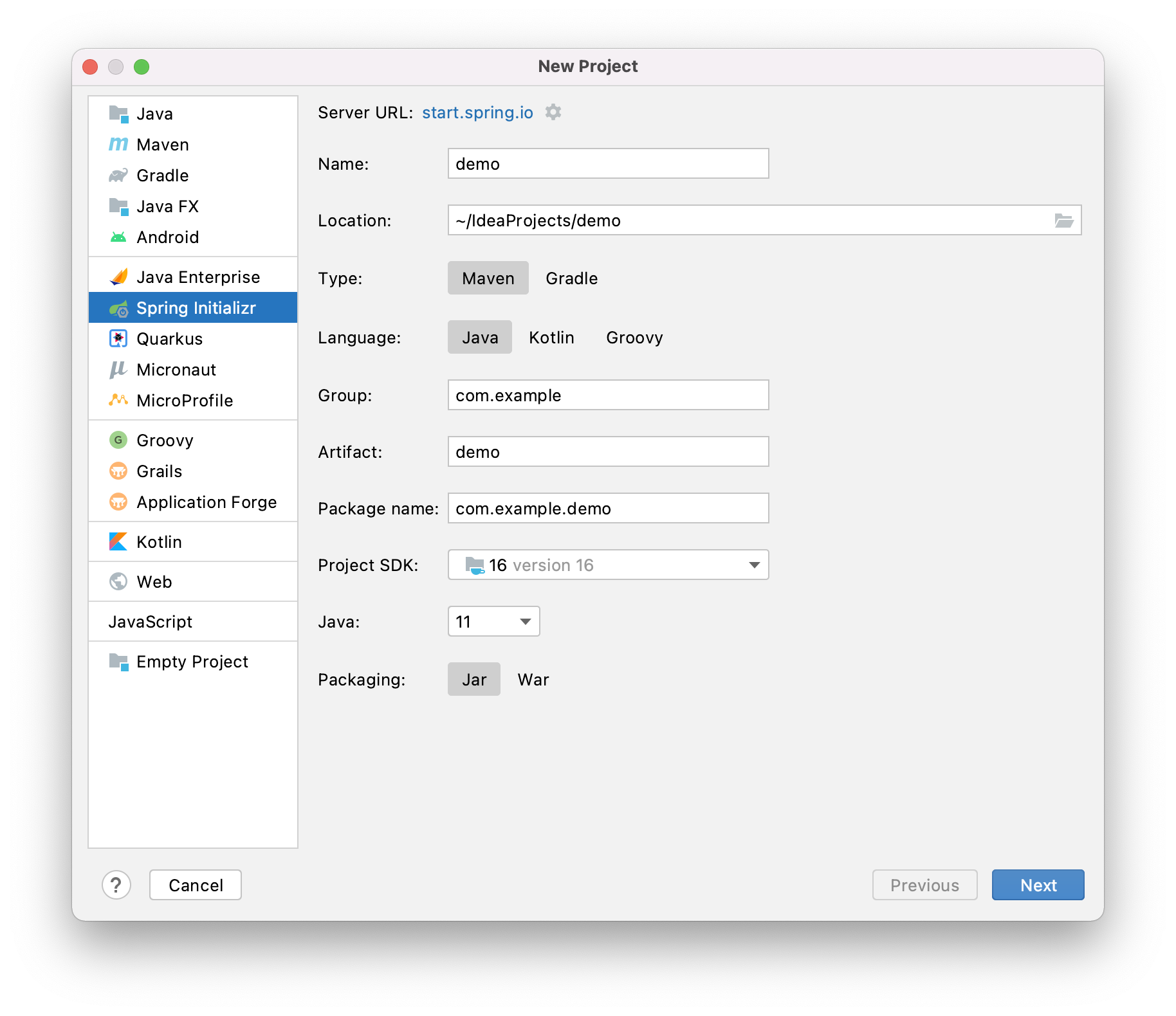 3) The next page is where you can configure your Spring Initializr project and add the required dependencies. We're going to keep it really simple for this project as we just want to serve the string "Hello World" locally in our browser. Let's start typing in Web and see what options we get. This will show you all dependencies that relate to Web development, we want the first one, Spring Web. Alternatively, you can expand the Web node (second from the top) and select Spring Web. That's all you need to do here.

One thing to note here is that it's really easy to add dependencies to your Spring project once you have created it. You should only ever add what you know you'll need at this step. It's easier to add dependencies at a later date than it is to remove dependencies that you may, or may not, be relying on at a future date!

Your page should look similar to this, depending on how you searched for Spring Web: 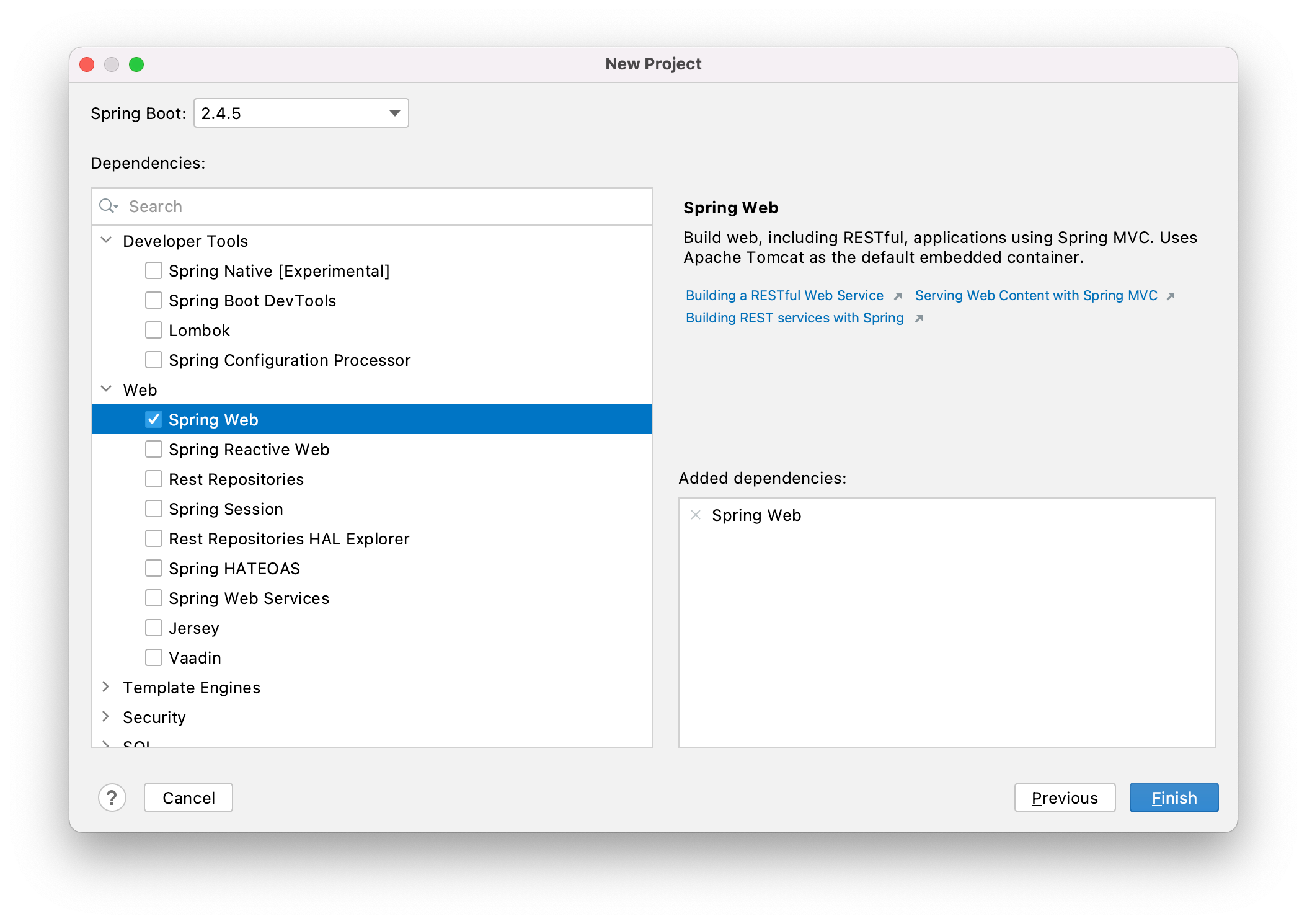 That's all we have to do to get our basic Spring project set up in IntelliJ IDEA. In the next step we'll take a look at what has been automatically created for you, and most importantly, why.

In the previous step we asked IntelliJ IDEA to create us a Spring Boot project with Spring Web as a dependency. Let's now take a look at what has been automatically created, so that we can build on that understanding in the next step.

Let's take a look around some aspects of the project. The easiest way to do this is from the Project tool window which you can access with ⌘1 on macOS, or Ctrl+1 on Windows and Linux. We will look at:

This file is generated with the dependencies that you selected when we created this project.

It's very easy to add dependencies to your pom.xml file once you have created your Project. Use ⌘N (macOS), or Alt+Ins (Windows/Linux) and then browse for your dependency. However, for our demo, these are the only dependencies that we need.

This is what your Java file will look like. The name will be whatever your called the file with Application appended to it.

We've got our package at the top of the class as you'd expect followed by our import statements.

This @SpringBootApplication annotation enables additional Spring Boot functionality which is useful to know in case you find yourself troubleshooting your code.

The main line here is:

This makes a call to SpringBoot's run method, and we need to pass the main class of our project to Spring, in this case, it's the same class.

For example, we have a dependency in our Maven pom.xml called spring_boot_starter_web. That in turn, has a transitive dependency on spring-boot-starter-tomcat. In this instance, when the Spring run method is called, it checks the class path and your application.properties (which is empty) among other things, and sees that you want a Tomcat webserver, so it creates one for you.

If you head down to the test > java > com.example.springhelloworlddemo folder you'll see you have another class called HelloWorldApplicationTests.java``. This is a test you get for free with Spring Boot. It checks if the Application Context can start, it will fail if not. The test can be a useful starting point for creating your own integration tests.

We have the basics of our Spring Boot Application at this point. You can run it with Ctrl+R (macOS), or Shift+F10 (Windows/Linux). Alternatively you can use the gutter icons:

The application will run using the Tomcat webserver. You can verify it's working by going to your web browser and typing localhost:8080. Port 8080 is the default port for Tomcat.

You should get a 404 response which will look similar to this:

We're getting this page because we have support for REST Controllers with the spring-boot-starter-web dependency, but we also need to create a controller and add a request mapping for that controller. We will do both of those things in the next step.

Lastly, before we do any more development it's a good idea to stop your server from running. You can do this with ⌘F2 (macOS), or Ctrl+F2 on Windows and Linux.

Now we have our functioning Spring project we need to create a Spring Controller to handle the web requests.

One important thing to note here is that you don't need to tell your Spring Application class about your (new) Spring Controller class. That is handled by the @SpringBootApplication annotation in the Application class which also consists of other annotations, including @ComponentScan. This means that the current package, and sub packages will be scanned for Spring components. It's a little unnerving when you first start using Spring but in time you'll get used to it once you have an appreciation of what Spring is doing behind the scenes for you.

1) Create a new Java class in the same place as your HelloWorldApplication.java class called HelloWorldController.java.

2) The first thing we need to do is tell Spring that this is a REST Controller, so you need to add a class level annotation of @RestController. This annotation means this class will be picked up by the component scan, because it's in the same package as our Application class. Our REST Controller, HelloWorldController, will therefore be available from the application context.

3) The next step is to create a method that will tell Spring that if we go the root of our webserver, we would like to see the string Hello World from Spring Boot. To do that we need to add a method with a @RequestMapping annotation like our helloWorld one here:

4) Now we need to re-run our Spring application. You might need to stop it first if it's still running from the previous step. You can run it again with Ctrl+R (macOS), or Shift+F10 (Windows/Linux).

5) When you go to the browser, enter the following URL localhost:8080. You should see your text being returned:

6) Assuming that's working correctly, you can start to get more adventurous. Try adding this new code below your first method:

7) Now run your application again. At the root you should still see Hello World from Spring Boot because the MARKDOWN_HASHfe7b83329725956f76335a5a0b65595eMARKDOWNHASH is /_ indicating root. However, if you now type in localhost:8080/goodbye, you should see Goodbye from Spring Boot.

That's it! You're done, congratulations on creating your first Spring Application and serving some text in the browser! In the next section we'll create a test for our application.

Creating a Test for your Spring Boot Application

Let's write a test to check that in the event of an HTTP request, we get the response that we are expecting, in this case the string Greetings from Spring Boot.

Tests for Spring Boot are written using the standard JUnit5 Testing Library. If a test is going to need access to Spring's application context, it needs to be annotated with @SpringBootTest. These are effectively integration tests, as they rely on bootstrapping the Spring context before you can run the test.

1) We need to create a new Test class in the same place as our HelloWorldApplicationTest.java, we will call ours CheckHTTPResponse.java.
2) Paste the following code into your test class:

Passing WebEnvironment.RANDOM_PORT into the @SpringBootTest annotation starts the web server with a random port number. We can find out what that port number is by annotating an int field (in our case, int port;) with @LocalServerPort, the testing framework will inject this field with the random port number.

We get a TestRestTemplate for free with tests annotated with @SpringBootTest. The @Autowired annotation tells Spring that we want to get it from the context.

Our test itself is annotated with @Test. It will pass when our expected value is the same as the actual value from the webserver - our assert statement is comparing the string we are serving from localhost at this random port, with the string in the second half of the assert statement - Hello world from Spring Boot.

3) Let's run the test to check it works. You can run it again with Ctrl+R (macOS), or Shift+F10 (Windows/Linux). We should see that our test is green.

It's always worth checking our assumptions, so try changing the text to something other than Hello World from Spring Boot and check that the test fails. It should do!

In the next step we will summarise what we've done up to this point and list the resources we've used.

In this tutorial we used the New Project Wizard in IntelliJ IDEA to create a Spring Boot project with the Spring Web dependency.

We created a Spring Controller and served some text to the local Tomcat webserver. Finally, we added a test for our HTTP call.