In this article, we comparatively evaluate four different approaches to render particles in JavaFX in terms of runtime performance.

The evaluation suggests the following order of approaches from fastest to slowest:

All of the source code developed for this article can be found on GitHub. An example demo with 1 000 000 particles looks like this: 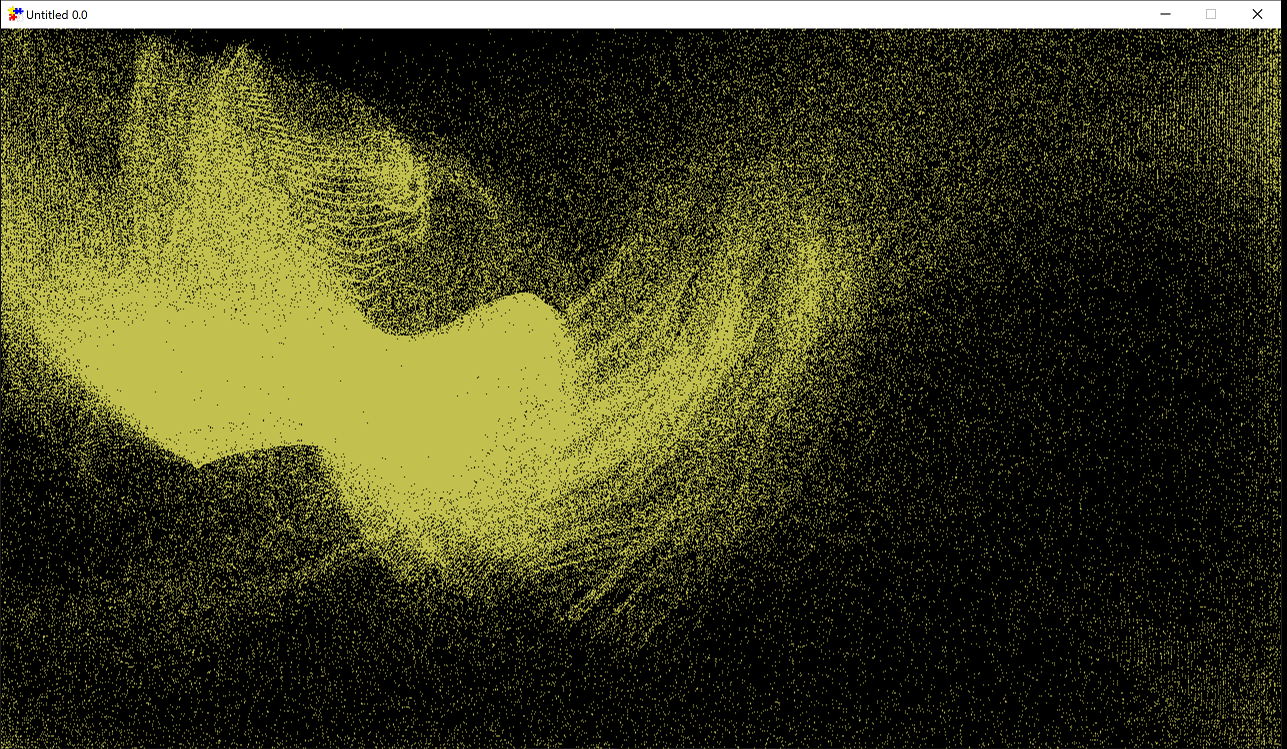 There is a number of use cases that involve rendering a huge number of individual pixels as quickly as possible, including point cloud visualizations, particle effects and simulations. As mentioned above, in JavaFX, developers have several approaches (techniques) of rendering pixels to the screen.

The Canvas API has been available since the early versions of JavaFX and is the most commonly used API. It is both intuitive and simple to use as it provides command-style methods to manipulate the associated GraphicsContext, simulating immediate rendering mode. One considerable limitation of Canvas is that only one thread can use its graphics context at a time. Given this limitation, we expect Canvas to be slowest in our evaluation. Sample code:

The PixelBuffer API has been introduced in JavaFX 13 and allows drawing into a WritableImage without copying the pixel data. Unlike the Canvas API, this buffer does not provide any means of rasterization. In other words, the developer is responsible for converting shapes into pixels, which is a significant limitation of this approach. In the following sample code, there are two major differences, when compared to the Canvas API. First, colors are represented as a single ARGB int and second, we need to manually update the buffer once rendering is done. Sample code:

As can be seen from above, in PixelBuffer, there is no high-level API to draw arbitrary shapes. Clearly, this is not ideal since the developer would need to reimplement many of the rasterization methods. To avoid this, we can make use of AWT BufferedImage and its Graphics2D API, since both BufferedImage and PixelBuffer can share the same pixel data. An example implementation has been provided by Michael Paus. The same implementation is used in our evaluation with negligble changes, which were required to incorporate the code into our framework. Sample code:

Having seen preliminary tests with the three techniques above, Dirk Lemmermann and Tom Schindl have hinted that moving the drawing algorithm to GPU would improve performance. It is known that running particles on the GPU can significantly outperform the CPU approach, particularly in games. It is not suprising given modern graphics cards, such as NVIDIA RTX 2080, have 2944 CUDA cores, capable of GPGPU. However, by using only public API in JavaFX we do not have a straightforward way of accessing the GPU video memory. As a result, our approach can be described as follows:

We can see that if we had direct access to GPU video memory, for example via DriftFX, we would not need steps 3 and 4. However, the tests in our evaluation do not meet the Java 8 requirement of DriftFX, hence it was not included in the evaluation.

However, for completeness, we also consider the GPU-accelerated version of PixelBuffer in our evaluation. This version uses the aparapi framework to dynamically convert and run Java bytecode on the GPU using OpenCL. Whilst the drawing code, using the ARGB color format to set pixels, remained the same, the architecture required significant changes to allow running on the GPU. We note that to correctly run this approach, the graphics card needs to support OpenCL and have the appropriate drivers installed. Sample code:

The model used for the evaluation is a particle system with 1M (1_000_000) particles. Conceptually, each particle is defined as follows:

The acceleration computation takes into account the mouse position in order to incorporate user interaction, as is common in many real-world applications. This model represents an embarrassingly parallel problem and can, therefore, be computed in parallel. In our evaluation, all approaches, except for Canvas (for which the reason was outlined earlier), can be run in parallel. In total, each approach computed 1100 frames of this model, during which using System.nanoTime() we recorded the time the approaches took to compute each frame. The first 100 frames were discarded to account for the JIT compiler on the JVM. Hence, the time measurements were recorded only for the last 1000 frames. In addition, we included a 10M (10_000_000) particle test on GPU, given that there was likely to be a sufficient performance margin.

The evaluation was performed on a 6-core Intel i9-8950HK, running at a fixed 2.6GHz (without Turbo) and 32 GB of RAM, with a NVIDIA GTX 1080 graphics card. The OS and environment details are as follows:

No active foreground applications, except for the IntelliJ IDE, were running at the time of the evaluation.

The evaluation results are available from the table below, which shows the amount of time that each approach took to compute a single frame. The values are given to 2d.p. in milliseconds. Each column provides the following information:

We should be mindful that the results of the evaluation are limited to the implementation of approaches and the use case context. For example, as Laurent Bourgès correctly pointed out, the evaluation does not provide a direct comparison of Java functions (for example, fillRect() and setPixels()), but instead provides a test in a practical setting, where parallel computing is an option. Therefore, these results do not generalize to use cases where rasterization methods are used, such as drawOval() or drawPolygon(). Laurent also indicated that there might be unnecessary write operations to PixelBuffer when particles overlap. The effect of an unnecessary write operation (against checking if the write is needed) was not evaluated.

Another potential limitation is the particle system model implementation, which could have affected the runtime performance of these techniques. Whilst the same model was used for each technique, it is not clear whether the model architecture could have favored one approach over the other.

In this article, we evaluated four different approaches to render individual pixels to the screen in JavaFX. By appealing to their runtime performance, the evaluation revealed that the PixelBuffer approach in conjunction with running on GPU is fastest among the evaluated techniques.

It would be interesting to see if custom rasterization methods, such as drawing a rectangle or a circle, can be implemented to run on the GPU, thus overcoming the API limitation of PixelBuffer. In turn, this new approach would allow JavaFX applications to fully harness GPU cores.

A further evaluation of such an approach against existing state-of-the-art would be needed to provide a relative ranking of techniques in terms of performance.

Many thanks to the members of the JavaFX community on Twitter who have pointed me towards relevant sources of information. If you spot an error in implementation or have suggestions on how to improve performance, please contact me on Twitter.

This was helpful – hope to see lots of JavaFX related stuff here!